Honestly… While I understand that it is brutal, and perhaps the idea that this kind of brutality is no longer necessary… I have to wonder.

With how over-sensitized people are becoming, and how low the bar of expectations has been pushed for the sake of the weakest among us, I have to wonder… where is the line between being accommodating, and self-destructive?

The way I see it, when you can reasonably make accommodations for those less fortunate, and they are not at the expense of the greater whole, it makes sense.

But what happens when you begin tearing entire social constructs down for the sake of the few? What happens when making accommodations becomes a moving target that can never be fully satisfied?

I believe it is important to have situational awareness, because it allows us to make judgment calls. It’s good to try to be inclusive and accommodating. But it’s also good when the people you are trying to accommodate are understanding of the imposition they are placing on others. I believe it is just as selfish for some people to constantly require accommodations, while never making any of their own for others.

At the end of the day… what really has me questioning where that line is drawn, is this tiny little faction of folks, that, sadly, are gaining traction, in the effort to replace clapping your hands as applause with “jazz hands”.

I mean, fucking come on… This is one where I am drawing the fucking line. If clapping triggers you, you do not need me to withhold or substitute my applause, you need some help! I’m not trying to be mean, but you are psychologically ill, and you need help. My continued allowance of your over-sensitization is *NOT* helping you. It’s hurting you. Because, at that point, it is clear that basic social functions are too much for you to cope with, and I will be damned and dead before I change my social values to accommodate your weakness, while you do nothing but impose more and more and more and more restrictions on me, because of your discomfort, over things that are common social constructs.

What’s next? People with nasal, or overly masculine vocal tones to be banned from speaking in public? While it may seem like a silly or arbitrary issue… up until a couple years ago, so would the idea of clapping as an emotional “trigger” creating PTSD.

No… I don’t think so… While I do not believe that we need another Sparta, I do believe there is nothing wrong with Spartan culture, and I think we could learn something from it. 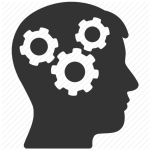 – “I’m just a guy who has thoughts. So I post them to the internet!”

7 months ago The Big Thinker

9 months ago The Big Thinker

10 months ago The Big Thinker